People often ask about the origins of China Bear, especially when it comes to the name. The truth is, it came from a boat.

Back in 1978, the founders of the company, Tony Kuypers and Bruce Bailey, had come to an agreement on almost everything that would make up their joint venture into the removals game. They were having a quiet ale in a bar on Sydney Harbour at the time, discussing what they were going to call the company, when they saw a large cargo ship come in. The name of the ship was China Bear!

Aside from being very memorable, the name has been a benefit in other ways. In 1988, when two giant pandas visited Australia from China as part of our Bicentenary celebrations, we were chosen by Taronga Zoo to handle the ground transportation. We rocked up at the airport with the iconic truck, and the crates holding Xiao Xiao and Fei Fei were loaded into the back – as well as some zoologists and vets to make sure the pair didn’t get carsick. Under police escort, we weaved across Sydney, over the Harbour Bridge to the zoo. 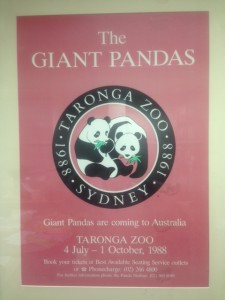 (Later, when we drove the pandas back to the airport so they could go home, we were presented with the framed poster at the top of this entry.)

China Bear has built up an amazing history since 1978.We’ve always been based in the eastern suburbs of Sydney, so the green trucks with the dancing panda have become very recognisable over the years, giving us a lot of repeat business. Now that the kids have grown up and moved out of home, they continue to use the Panda!

And yes, we’re still available for the transport of endangered species, if any zoos are reading.